Skip to content
HomeGaualofa: A trip back down memory lane.

What you do out of love will live forever.

Gaualofa in Okahu Bay. I ❤️ this this photo which includes the self made buoys from left over Jandal material and bound in netting. Effective use and repurposing of rubber.

An old school friend Maselina from St Mary’s Savalalo, Samoa tagged me on facebook and said did I know that the Gaualofa was back in Auckland. She suggested I take some time to come down to Okahu Bay and show my support.

I was super excited.  In April 2011 I had been privileged to catch a ride on the Gaualofa. You can read that story here.

The Gaualofa is  an example of Samoa’s double-hulled voyaging canoe. To this day I still have fond memories of the excitement I had sailing on this traditional Va’atele and remembered stories of my great grandmother sailing between islands. You can learn more about the Gaualofa by reading this description.

In 2012 Gaualofa was gifted to the Samoa Voyaging Society by Okeanos Foundation for the Sea founder by Dieter Paulmann and his wife Hanna.

I got the chance to speak with Schannel Fanene van Dijken, President of the Samoan Voyaging Society and who works for Conservation International Samoa. He explained, “The Samoan Voyaging Society (SVS) is a non-profit Samoan organisation that is reviving the heritage of traditional ocean voyaging/navigation and environmental stewardship with new generations of Samoans and other Pacific Islanders. The Society is the caretaker of the Gaualofa, a 22-meter Samoan traditional Va’a or Vaka (Ocean sailing double hulled voyaging canoe) which is used as a platform to deliver traditional navigation/way-finding and ocean and environmental education programming around Samoa and surrounding Islands. The Va’s is our floating classroom with our main goal to enhance the environmental knowledge and importance of caring for our environment amongst our Pacific people, provided by our 14 – 16 trained crew onboard. Since 2009, the Vaʻa Gaualofa has sailed more than 40,000 nautical miles. The Society’s work has been recognised and supported by the Samoan Government, the United States, Chinese and NZ Embassies in Samoa, Okeanos Foundation, Disney, and Conservation International.”

Schannel  stressed that “the New Zealand voyage is an important one. Not only does this allow us to honor and celebrate our shared ancestral bonds with our Maori aiga, but also highlight to our Samoan based aiga who we are and what we represent.”

The theme of aiga is an important one to the crew and to the wider Aiga Folau because the not-for-profit organisation works not only to revive Samoa’s traditional sailing and navigation skills but also our past stewardship responsibilities that promoted sustainable land and ocean resource use amongst communities.

The Gaualofa event is also a reminder for us at Newmarket School to continue our enviro work. Our children completed a beach clean up at Okahu Bay a few years ago and it is a timely reminder to keep revisiting our schools goals of being sustainable. I know my recent visit to Tiritirimatangi was a bit of a shock because I was there soon after a storm and spent a few hours collecting plastic off my favourite beach. But not just the soil and water sustainability but also the air because we need clear skies to read the stars. So the sustainable work I have done with my students in regards to clean air all helps.

The crew will spend the next month preparing their vessel and participate at the Auckland Anniversary weekend Tāmaki Herenga Waka Festival.

They will then set sail north to the Bay of Islands for Waitangi Day celebrations on the 6th of February. After that they will sail alongside Haunui and Ngahiraka mai Tawhitithe down the west coast to participate at the Pacific Climate Change conference and the New Zealand Festival in Wellington as they are part of the central participants at the ‘Waka Odyssey in February’.

The Gaualofa will be in Wellington until 28th Feb then sail up west coast again to Porirua for another set of community events, going into early March. Finally they plan to leave New Zealand from Kawhia mid March and make the 2000 mile voyage home to Samoa in April.

The crew will be engaging with the public and schools during these sails and events. There will be many public sails, school visits with the goal of promoting culture and environment.

Maselina and I spent a few hours down at Okahu Bay catching up.  I have not her seen face to face for forty five years.  But because of social media time is not that important. In addition I met several members of the 2018 custodians of the Gaualofa such as Trevor who comes from the same district of Falealili as my family, Jamal who is from the Tamasese family and Xavier. I found out later that Xavier has one daughter called Nafanua after the Goddess of War. Nafanua’s weapon of choice was known as Ulimasao and that is also my online name.

Later I was also able to meet several of the other crew members. I was super excited to catch up with Fealofani Brunn who now captains the Gaualofa and also Kalolo Steffany who is now the navigator for the Gaualofa.

The current crew of Gaualofa.

To give you an idea of the sort of activities  SVS are doing with the Gaualofa, check out the following links to see the pilot community program carried out earlier in 2017 with taking the Disney movie “Moana” around Samoa.

you can contribute via their website and head along to one of two upcoming fundraising events in January to raise funds for the general maintenance of the Gaualofa and provisioning of the crew. 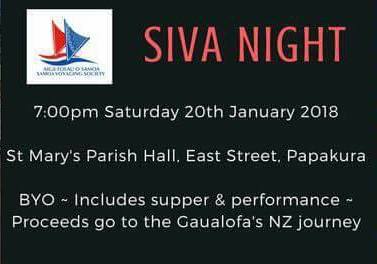 Other ways you can help.

Below are some of what I saw that you could help with.