In October of 2012, I attended Ulearn as an attendee. From the flood of information that washed over me I set two goals.

The first was to run a TeachMeet in New Zealand using Google Hangouts to provide a space where teachers can share their stories. That goal has eventuated and has grown into a curated resource for education that currently has over 70 teacher stories in 3 minutes.

The second goal was to to have our children collaborate on a Global project. This second goal is drawing closer. This year a school global project will be launched that was developed as part of my #FlatConnect Global Educator outcomes.

In the past we have coordinated and run two global projects and have taken part in a few others. Our coordinated projects involved hosting an author in the hot seat. The first session was hosted face to face at the National Library and we hosted Sandra Morris. We had six New Zealand Schools involved and one came in via Skype. Most of the asynchronous communication took place via email. Except for two teachers via twitter. During the global event we used synchronous communication such as Skype and the children used the ‘author in the hot seat forum’ on Superclubsplus to ask questions of the author.

The following year in May 2012, our children took part in a Global Project coordinated by the BBC. You can read more about that here. The asynchronous  tools used were email and youtube. Later that month we ran anothercoordinated global session using Superclubsplus and this time directly from our school. We hosted Ant Sang, kiwi graphic artist extraordinaire.  The story was featured on TKI as part of the Snapshot For Learning series. The link can no longer be located so have added the link to the shared doc used to create the entry. Virginia Kung our assistant principal was the driving force behind this project as part of her inquiry and I coordinated the tool supporting her. Again our synchronous tool was the ‘author in the hot seat forum’ on Superclubsplus. Note here, Superclubsplus is now known as Skoodle.

As 2015 begin, I think about how our next global project will eventuate. As a Travelwise school with a focus on reducing traffic at the gate, we will take a leading role in this Flat Connect global project and this time I want the children much more involved at the connecting, collaborating, creating and sharing process. I have observed some of the global work we have been involved in and have led and have identified the one offs. Using SOLO Taxonomy this is multistructural in thinking and in order to move to relational thinking we need to create learning experiences that last longer than a one off synchronous session. The skype in the classroom our students were recently involved in was another example of these one off sessions. I regard these one off sessions like a tourist hopping on and off the bus. ‘Stop, take a photo- here is the evidence I have been here and taken part.’

At Newmarket School the #FlatConnect Global Project Travel2School for children will focus on students as participatory orientated citizens as framed by Westheimer and Kahne’s (2004) conceptions of citizenship. We will unpack what this means by identifying responsibilities such as.

Over the past year, Newmarket school have been learning the Nature of Science with Susan Heeps.

This has involved professional development with hands on activities, the opportunity to revisit the National Science curriculum and the chance to learn from each other. In addition we have been learning about the importance of children making real links with what is going on in their lives. 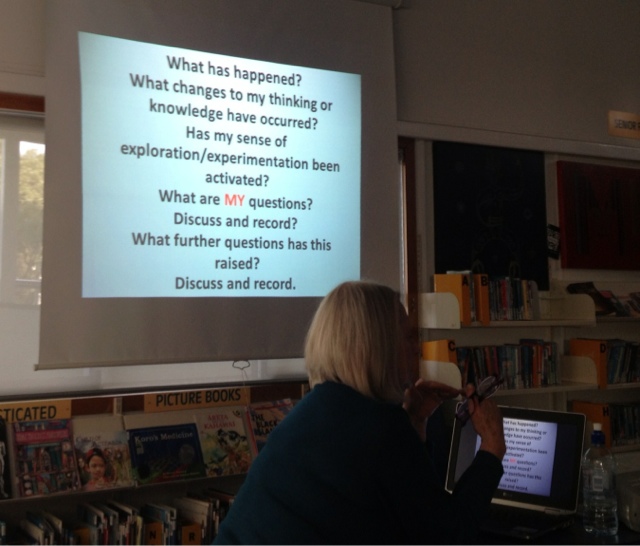 Over the years, Newmarket school have had the Life Education van visit our school. The children have loved working with Harold and learning all about respect of others and of self. So when the opportunity  came to be part of the celebrations and to see The great Gatsby, I answered yes to attending the event. What I took from the evening was how important it was that communities had ownership of the projects.

We were introduced to Caring and Co who were a group of high school students who won regional awards with their project to ensure that children would have the opportunity to attend Life Education sessions with Harold.
I took with me our current Mandarin Language Assistant and her friend.
We had an enjoyable evening and like our children I was excited to meet Harold and get my photo taken with him. 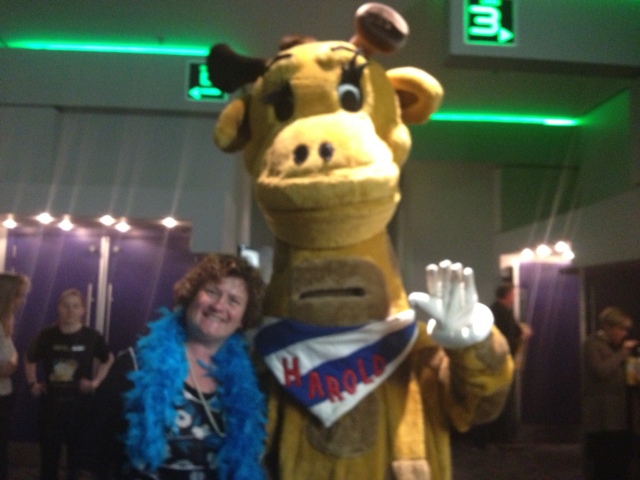